I'm happy to report that our overnight write-in at the Stanley Hotel was a grand success.  Our most productive wrimo got a whopping 25,000 words written, and although no one else was quite that insanely successful, we all were pretty productive.

Despite our label as the "social condo," once the Cards Against Humanity game was over a number of people went down to the third condo to write for a little bit.  After that, a few of the "social cabin" members came back from the "quiet and focused cabin," and we all worked pretty quietly until midnight.

Once midnight rolled around, we all rewarded ourselves for our hard work.

A few of us (myself included) had never seen The Shining, so we settled down to watch the movie.  Maybe we were all punchy from writing for hours, but you would have thought it was a comedy from our laughter and commentary.

We also had a fun little treat that one of our wrimos brought: These spooky writing cookies by Lindy's Traveling Treats.  With the handwriting and the frosted designs, another wrimo mentioned that they looked like Poe-themed cookies -- perfect for an overnight write-in at the Stanley, and a viewing of The Shining. 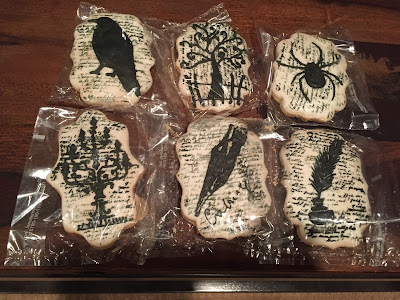 I'd been planning on working some more after the movie, but by the time it was over we were all pretty tired.  We headed to bed; a few of us worked from bed for a little bit, but most of us petered out pretty quickly after that.

We're talking about doing it again next year, but doing two nights instead of one.  That way we'd have more time to spend in the actual hotel, which most of us missed out on this time.  And also that way, we'd have an entire uninterrupted day, where we could write and play games and tour the hotel, unhampered by checking in and cleaning up to check out (which consumed a lot of our time yesterday and today).

But I've been thinking more about doing my own writing retreat sometime.  I love the idea of writing with views like this one off our balcony last night at sunset. 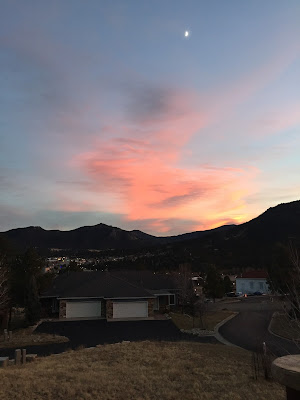 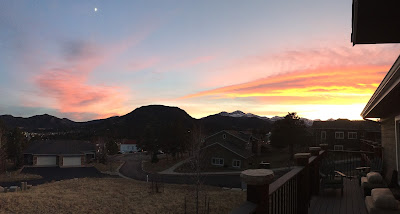 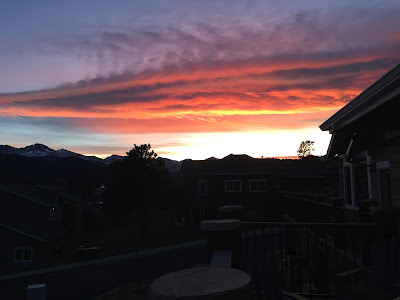 But I could write in other locations too, preferably an old hotel with that historic building atmosphere.  I'm not really interested in a guided writing retreat -- I'd like this to be more of a solitary or semi-solitary (i.e. just a few friends) thing.

Has anyone else every planned a writing retreat like this?  What was your experience?
Posted by Katharine Swan at 7:24 PM
Email ThisBlogThis!Share to TwitterShare to FacebookShare to Pinterest
Labels: NaNoWriMo 2017

This blog runs two types of ads, AdSense ads (always marked "Sponsored") and affiliate links to products I recommend. I have turned off auto ads with AdSense to maintain control over the ads on my site and ensure that your experience is as uninterrupted as possible. Products I recommend may include affiliate links, but I promise to always be honest and transparent about the recommendations I make. Please note that as an Amazon Affiliate, I earn commissions on qualifying purchases made through these links.