Live-blogging from the museum write-in

I'm sitting here at a write-in at the museum, with a big rolling white board blocking the sun from falling on my screen. 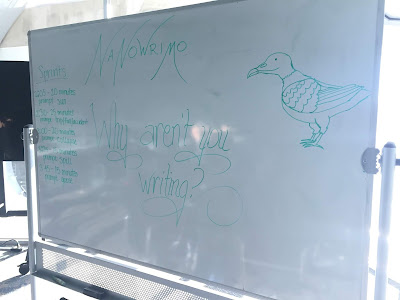 We have some really great write-ins that we do every year.  The weekly Friday night write-in at Perkins is always one of my favorites, of course, since that's the year-round continuation of a write-in that originally started during NaNo 2011.  I've also organized a great write-in on Sunday afternoons/evenings at a local gaming coffee shop, and they've become a fantastic supporter of our region, as they've been hosting our kickoff party as well.

We usually do a couple of big events, too.  For example, we did an eight-hour write-in this year, where we wrote from 3pm to 11pm last Saturday.  We had about 25 people at that one.

The overnight write-in at the Stanley Hotel in Estes Park, famous for being the basis for The Shining, is also always a hit.  We didn't do it this year because it takes a lot of planning and all of us MLs were unusually busy, but we did it the previous two years and it was great.  The first year we had eight people crammed into two rooms in the original hotel, and the next year it had exploded to nearly 30, for which we rented out three condos above the Stanley.  But it's still not my favorite.

My absolute favorite write-in is the one that I've been organizing every year at the museum.  The museum is a place that's close to my heart, so a couple years ago I thought it would be a great place to hold a write-in.  We met at 10am, visited one of the special exhibits in the morning, got lunch, and then wrote for the rest of the afternoon until the museum closes at 5pm.  That first year, there was a fantastic special mummies exhibit that we went through, and then we wrote in the atrium overlooking City Park.  The atrium faces west, which makes for a beautiful view, but not a very ideal place to write, as the afternoon sun cuts in fairly strongly.  As a result, the atrium was hot and bright, making it difficult for us to find any place that would be comfortable to sit and write. 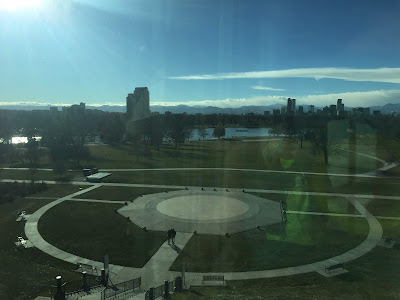 Last year I got smart and booked the conference room above the atrium, which has shades to block out the sun.  The museum books the atrium for free for nonprofits, which of course NaNoWriMo is.  We met in the morning again, toured the special dinosaur exhibit, had lunch, and then wrote in the conference room for the rest of the day.

This year I was able to book the conference room for the day after Thanksgiving, which meant more people were able to get the day off, and we've had a good showing.  We toured the Mindbenders exhibit this morning, which I've actually done many times, so I was free to manage the number of people we had with us -- a new challenge for me!  After beating our heads against brain puzzles for an hour, writing should seem easy in comparison, right?

So aside from the sun slanting in the window, which is luckily easily blocked with the rolling white board that's in here, we have an ideal place to write.  The museum has been fantastic, too, and went to the trouble of finding more chairs for us when our group turned out to be bigger than we thought it would.

Such an amazing place to write, and it makes it so much better that they've always been so friendly and welcoming!
Posted by Katharine Swan at 2:56 PM

Email ThisBlogThis!Share to TwitterShare to FacebookShare to Pinterest
Labels: NaNoWriMo 2018