A tale of two computers 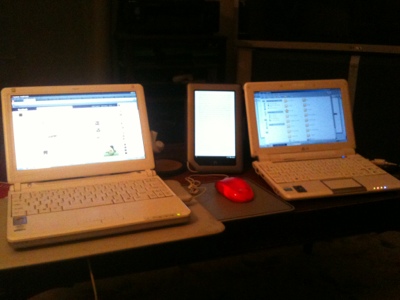 Since my netbook's hard drive quit a couple weeks ago, I've been using my old Averatec more.  It's my backup computer, so I used it while the Asus was getting the hard drive replaced, but I also used it for several days after I got the Asus back.  It was having quite a few problems when I retired it ages ago, but part of that was that Outlook was freezing -- and since I haven't been using Outlook on it (just webmail), I haven't had any problems.

I'm remembering the things I liked so much about this computer, such as the nicer screen (larger, better pixel density, and just in general nicer to look at), and I've been thinking about reinstalling the operating system so that I can start using it more again.  I went ahead and ordered a new battery, too, which came yesterday (the old battery wouldn't hold a charge at all).  The new battery is telling me that I'll have close to 5 hours of battery power with it fully charged up, which is far more than the netbook -- another point in its favor.  The biggest disadvantage right now is the smaller hard drive (though I have a USB hard drive to put pictures on, so it really doesn't matter) and the fact that it runs a little hotter than the Asus -- not a good thing in summer, but since I'm not really at home anymore during the hottest part of the day, that's probably not a problem.

I have been so busy this week that I haven't had much of a chance to do anything with the computers.  Both have been sitting on the coffee table in the living room, the last place I was working on them (partly because there isn't room on my desk for both until I clean it).  Today I'm working on getting the most recent copies of all files onto each of the computers.  I also need to finish reinstalling some of my software onto the netbook -- I haven't yet done that since getting it back -- and I want to test the Averatec's battery to see how much time I really get out of it.  Once I've done that, I'll reinstall the operating system.

In order to solve the problem of which computer to use, I intend to clean my desk and keep both of them there, with one out of the way at all times so that I can work on the other, but easily change them out if I want to.  And then we will just see which one I end up liking best over the long run!
Posted by Katharine Swan at 1:10 PM

Email ThisBlogThis!Share to TwitterShare to FacebookShare to Pinterest
Labels: laptops for writers

I've never even heard of Averatec and now I want one. :)

Lori, hi! Good to hear from you. Sorry for the delayed posting, I don't even remember seeing your comment until very recently. On one of my other blogs, Blogger only just notified me of 23 comments dating all the way back to February, so it's quite possible yours got lost in Blogger jail, too.

As for Averatec, I don't think they've been made for a few years now. I remember seeing that they were changing their name and veering away from the smaller laptops, and by the time I bought my netbook in 2009, the new company was gone, too. Such a shame -- it's a great little computer!